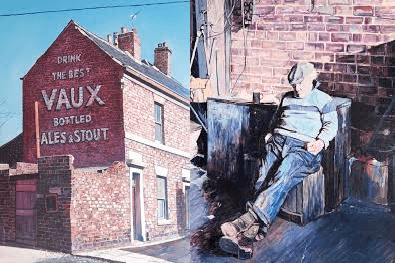 Born in Gilsland in 1944 and mainly self-taught, Peter worked for many years in the shipbuilding industry where he gained much inspiration for many of his character studies. These later formed a major contribution to the book ‘Where the Wall Ends’ which illustrates the industrial history of Wallsend.

Peter was greatly influenced by the Renaissance period of the 14th and 15th century Italy and especially the works of Leonardo da Vinci. Working in several media, he has exhibited in most of the major galleries in the North East and he has also held a number of one-man exhibitions in the area.

In 1978, British Shipbuilders commissioned him to undertake an 18 month project portraying the shipyard worker and his environment in the North East which resulted in a major exhibition at the University of Northumbria. These paintings are now on permanent display in Newcastle and London. He was also commissioned to provide paintings for International Paints in 1981, Whelan Builders in 1982, and Rothmans UK in 1986.

In 1984, Peter was chosen by Shell UK to design and illustrate their calendar, ‘Shell and the Community’. Two of the calendar paintings, ‘Young Musician from Shell London Symphony Orchestra Scholarship’ and ’17th Century Sotherington Barn, Bedales School, Hampshire’ were selected for an exhibition at the Barbican Centre in London entitled, ‘That’s Shell, That is’, commemorating 60 years of Shell Advertising. The calendar was also selected for the Business Calendar Exhibition in 1984, which was held in Stuttgart, and was subsequently voted ‘Best Business Calendar of the Year’.

The impact of Peter’s work in the North East is that both the BBC and Tyne Tees have made short feature films about him. One of his oil paintings, a portrait of John F. Kennedy, was accepted for a joint research project by the John Fitzgerald Kennedy Library and Drew University, Madison,New Jersey, who compiled a study aimed at measuring the extent and nature of President Kennedy’s influence on paintings, sculpture, drawings, graphics and illustrations. This painting is now the property of the John Fitzgerald Kennedy Library. Catherine Cookson, the novelist, sat for him between 1984 -1985, and he produced a series of drawings and sketches of her.

He is married to Maureen, with two daughters, and lives in Low Fell