Hidden Gems in the

The Bob Abley Art Gallery at Spennymoor Town Hall is proud to host a large, permanent collection of Norman Cornish works of art – many of which have never been seen before. Our Norman Cornish North East art gallery also has a number of pieces of artwork for sale.

The art gallery also features a range of artwork from other regional artists also available for sale.

We welcome people who would like to sell their own art in the gallery. If you are interested in displaying your own art please contact us on 01388 815276 or email info@spennymoor-tc.gov.uk.

The Bob Abley art gallery is made up of both large and small rooms hosting a large selection of sensational and affordable art for sale as well as a fine collection of permanent works demonstrating Spennymoor’s great heritage of mining art.

While owned by the Town Council, the gallery is run on a daily basis by hard working and committed volunteers who will happily show you around and explain things for you.

The main gallery is the Norman Cornish Room. The exhibition hosts the work of Spennymoor’s most famous artist and includes a selection of original pieces of his work, loaned by Northumbria University, the Town Council and the Cornish Family. There is also a large selection of original work by Norman Cornish for sale as well as a range of framed and unframed prints, books, post cards and posters. With video footage of Norman talking about the area and how and why he painted in the way he did playing throughout your visit, this really is an experience not to be missed.

The art gallery displays are complemented by a range of other local and regional artists whose work is for sale and who change on a regular basis.

In addition to lots of Spennymoor folk, people have visited the art gallery from across the County, the Country and as far afield as Germany, Australia and Canada !

Our gallery is an ideal venue, easy to locate, accessible, and with ample parking to the rear.

Explore the Norman Cornish Trail which commences from
the exhibition located in the John Kitson Archway
For Further details visit the website  https://normancornish.com/trail

A Little Bit Of History

Spennymoor Town Hall Art Gallery is named after the late Bob Abley.  A retired secondary school teacher, Bob took on the role of voluntary curator when the gallery opened. He immediately focused on bringing together local artists to display their work. The first exhibition he curated in June 2011, celebrated Spennymoor’s art heritage arising from the Settlement Sketching Club started in 1931. All the main artists associated with the Settlement were represented – Bert Dees, Bob Heslop, Jack Roach, Norman Cornish, Jack Green and Tom McGuiness. The exhibition created a great deal of local interest and, as a result, Bob Abley managed to recruit a number of volunteers to help in the gallery.

In June and July 2013, the current Settlement Art Group exhibited their work. They were placed alongside a retrospective exhibition of the art of Bob Heslop and Tom Alderson, who worked together at the Settlement in the 1950’s. This coincided with Bob Heslop’s family donating much of the artist’s unsold work to the gallery.

Councillor Clive Maddison, George Teasdale, Bob Abley and Councillor Jim Smith were the original champions of the art gallery and were instrumental in it coming about in 2011.  In 2013 one of the gallery rooms, that now houses the Town Council’s own collection of art and artwork provided on permanent loan to the Gallery, was named after Councillor Jim Smith who sadly died in the autumn of 2012.

In 2014, the Committee Room in the gallery was named The Robert Heslop Room and an exhibition entitled A Putter’s Art was opened by the artist’s son and daughter. By that time, Bob Abley had been forced by ill-health to retire from his role as gallery curator and the Town Council generously agreed to name the gallery The Bob Abley Gallery at Spennymoor Town Hall.

Bob died in June 2014 in the middle of planning an exhibition which combined his love of history and art with his love of his home town. The Spennymoor’s Great War exhibition in August [marking the centenary of the start of World War One] was completed by his colleagues. It was seen by many of those who visited it as a memorial to Bob as well as to those who suffered in the war and its aftermath.

“Brilliant! Always exciting to see Cornish’s paintings and sketches. Very moving!”
“A great representation of a disappearing North East.”
“An amazing record of a way of life.”
“Spennymoor Town Hall – an excellent gallery.”
“Fantastic! Art that really speaks.”
“An inspiration to all of our local upcoming talent.”
“Very, very impressive. A gift! Remarkable collection.”
“A privilege to see work from a special artist and local man.”
“Our very own ‘Lowry’ genius.”
“A beautiful selection of work… personifies everything about the mining industry.”

The art gallery is always looking for new artist to exhibit their work in the gallery.
It only needs to be a couple of pieces of work.
If you would be interested in exhibiting please contact us for further information.

The art gallery is facilitated on a daily basis by our fantastic volunteers to show you around and explain about each artist and their work. We are always looking for new volunteers to help, as our visitor numbers are increasing on a weekly basis.

To find out more about the role please contact us

Following a highly successful exhibition of the work of the celebrated North East artist Norman Cornish attracting a great number of visitors since its opening earlier in the year, Spennymoor Town Council is delighted to be exhibiting the artist’s studio along with some previously unseen pieces of artwork uncovered when it was dismantled piece by piece and gifted to Beamish Museum.

The artist’s home in Whitworth Terrace, Spennymoor has been visited by famous actors, authors, broadcasters, dignitaries, politicians and television crews over the years. The studio itself became the venue for discussions about his work as his reputation grew and offers a fascinating insight into the creation of his art.

Beamish has contributed items from Norman’s studio, furniture and unfinished artwork, to the exhibition. The museum is set to replicate Norman’s former home in Bishop’s Close Street, Spennymoor, as part of its planned 1950s Town. The Remaking Beamish project has received initial support from the Heritage Lottery Fund for a £10.75million grant. 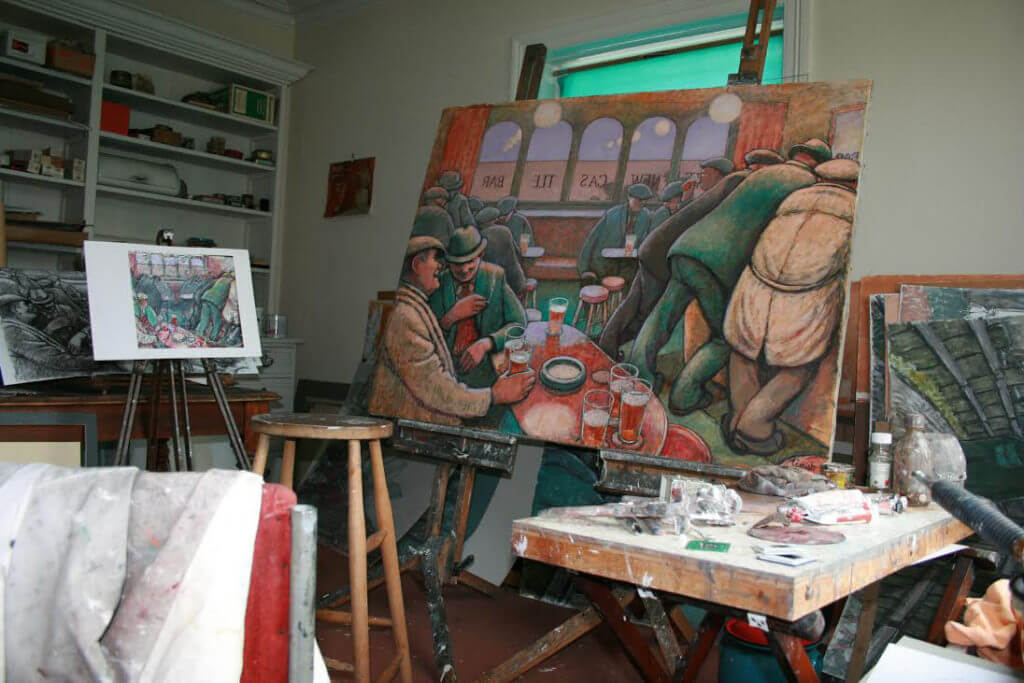